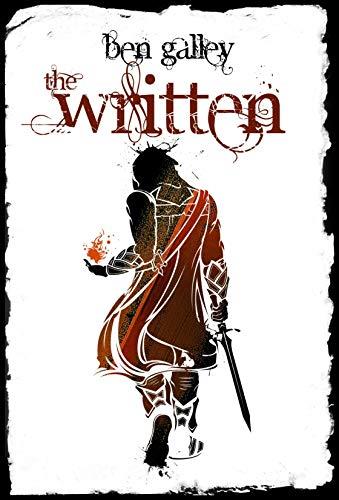 The first thing that attracted me to this book was the cover art because it’s atypical for a fantasy book. I’ve seen so many bad covers for fantasy books (bad in my opinion) so I was impressed to see this so tastefully done. Since the blurb doesn’t say much about the plot, I started reading with an open mind and no expectations whatsoever.

Without giving too much of the plot away, an ancient artifact (a magic book that no one knows what does) is stolen from the library in Arfell and five scholars are left dead in its wake. Arka is on the brink of war with the Siren dragon-riders and Farden must untangle a web of deceit and politics to find the truth and save his world.

Throughout the book, we come across familiar mythological creatures such as vampires (spelled as Vampyres), lycanthropes, dragons, and magic portals that mages use to travel long distances fast. The latter definitely came in handy!

We see the world through the eyes of Farden, a member of the Written – a group of powerful mages with books tattooed on their backs that give them power (and sometimes madness). If you’re intrigued by magical superpowers activated by a tattoo, I suggest you read an Urban Fantasy called Ink, by Jobie Baldwin. You can check out the book review here!

Back to The Written, Farden is tasked with the investigation of the stolen book that has him traveling across Emaneska. Along the way, Farden discovers that the magic book is, in fact, a dark elf spellbook, a manual for summoning beasts from the other side, and must stop the culprit before he uses it to complete a summoning ritual that brings about the destruction of the world.

The plot of the book is original and well put together, the world-building is immersive and the action is fast-paced so it doesn’t get boring. The main character, Farden is pretty bad-ass and sometimes comes off as a jerk. His addiction makes him flawed so you’ll root for him anyway.

Ben Galley loves playing with words and uses a plethora of metaphors. I know it’s common for high fantasy, but this style is not my cup of tea. I should mention I prefer Urban Fantasy to High Fantasy, so I know I’m biased. I know there are many readers who appreciate wordy texts and they’ll love to read this book! Also, since this is high fantasy, expect hard to spell (or remember) names like Kiltyrin, Fidlarig or Tyrfing.

To get a taste of the writing style, here’s a quote:

“Dark letters swam around his eyes and sleep flew from him like a murder of crows. They danced and fluttered their terrible black wings, swarming his room with cawing and scratching, reminding him of every mistake he had ever made, every bad thing he had ever done. The old Siren sobbed, huddled in a ball under the blanket.”

Despite the action scenes being fast-paced and fluid, I feel that interiors and objects are overly described. Long descriptive paragraphs are not easy to read and tend to distract from the action, but that’s just my opinion.

“ A single tear rolled from his golden orb of an eye and coursed its way down his scaly face with agonizing slowness. The tear quivered on the end of his chin for a moment before dropping soundlessly onto the book.”

Ben Galley’s debut novel paints an intricate story with fantastic characters putting a new spin on popular myths while struggling to save their world. As with any high fantasy, expect crazy names and plenty of metaphors.