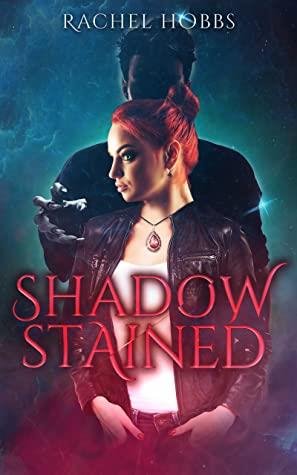 Her style is fluid with an emphasis on show rather than tell (a skill I’m still struggling with), which is remarkable for a first-time author. Beautiful and vivid world-building, interesting and fresh mythology, plenty of mystery, and a healthy dose of sarcasm make for an engrossing read.

The characters she created despite being complete opposites have many layers and depths, and ultimately they meet in the shadows. Ruby is your run-of-the-mill city girl that, at first doesn’t stand out in any way. But when push comes to shove, she doesn’t cower in fear and she does her best to protect the ones she loves. But she’s only human, and sometimes her best is not enough.

Drayvex, on the other hand, is a demon-lord, the ruler of another planet who has no qualms laying waste to the human world if it suits his plan. There’s something about Ruby that he can’t shake that against all odds puts a dent into his evil persona.

Do not even for a moment imagine this is an instant love story where the bad guy falls for the heroine and turns into a softie. No, the bad guy lies, deceives, and reluctantly saves the heroine after he puts her in mortal danger asking himself all along why he should bother.

For some reason, letting her die for his sins bothers him and he questions his own sanity when he feels the need to save her. Drayvex remains a badass demon until the end and Ruby learns that deception is sometimes necessary to save herself.

“He was pure darkness, a devouring abyss. And her light would never reach the bottom.”

Ruby is stubborn but also incredibly human and prone to stupid mistakes. That doesn’t make her weak or simple, it makes her a believable character. Feeling empathy for the world-destroyer demon lord (that also saved her life multiple times, albeit she wouldn’t have been in danger if it hadn’t been for him) reminds us (and Drayvex) that she’s human. The demon lord is impressed and annoyed with her kindness. Having been surrounded by evil for so long he doesn’t understand kindness and it fascinates him.

“He stared at Ruby for a moment, caught in some form of trance. She was standing on a demon planet, with no defenses and no choices, hostage of a Demon Lord with a long history of violence, and she was worried about him?”

Imagine my surprise when reading Shadow Stained I came across Romanian text (although the Language isn’t mentioned, being Romanian I didn’t need an explanation)!

“But there it was; the wonky Y-shaped logo. Big and bold amongst the creatures from the pits of hell. She ran her finger over the picture, pausing as her eyes found the small block of text underneath. Her breath caught in her throat. ‘The symbol commonly associated with the vânători de demoni.’

I suspect this guild of demon hunters will play a heavier role later in the series and I look forward to reading about it.