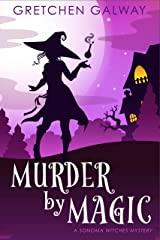 Here’s something funny before I tell you what I think about Murder by Magic (Sonoma Witches, book 5) by Gretchen Galway.

Spoiler alert! Actually, never mind. This is the 5th book in a series. Of course, there are going to be spoilers.

I’ve loved this series since it came out and I was curious how the slow burn between Alma and Seth would evolve and whether it would ever lead to anything. So, as soon as I started the story I knew something was off because now Alma and Seth are an established couple. I went online and checked the book series with bated breath. Have I read about their relationship and already forgotten about it? And then the horror hit!

I missed the 4th book in the series! Has that ever happened to you? It’s a first for me. I’ll double-check from now on. Also, I got book 4, Charmed to Death, and will read and review it as soon as I finish the current ones.

Well, relationship spoiler aside, Murder by Magic can be read as a standalone. I think each book is written in such a manner that you can easily read it without the others and it makes sense.

If I remember correctly, each book starts where the previous one ended, so I assume Murder by Magic is no exception. The story starts when a long-lost friend, Marcie, contacts Alma and asks her to accompany her to her Grandfather’s 113 birthday party. If you’ve made it this far in the series, you know what happens next: a murder. And it’s Alma’s job to figure out who the murderer is, not as an agent of the protectorate, but as a friend.

Things get touch and go when Marcie becomes the prime suspect and Alma has a deadline to clear her. I can’t say much about the plot without giving away spoilers, so I’ll just say that the mystery is solid, the action is fast-paced and the characters are well written with distinct voices and personalities. Some of those supporting characters I’d love to see, maybe, in future books.

I recommend reading this series in order. Give it a try if you enjoy cozy mysteries, paranormal suspense, well-rounded characters, and a hint of romance.