Dead Witch on a Bridge, by Gretchen Galway - Book review 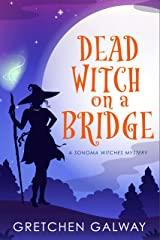 Dead Witch on a Bridge is the first book I read by Gretchen Galway, so I didn’t know what to expect. The book is the beginning of a series called Sonoma Witches, and the action takes place in a world where magic exists, but humans are kept in the dark about it.

I find it to some degree reminiscent of the Harry Potter world. Regular humans are referred to as nonmags. Unlike Harry Potter, the action takes place in the present day, and witches don’t necessarily need a wand to do magic, although in at least one instance there’s a reference to a witch getting her wand ready.

The story follows Alma Bellrose, a witch ‘honorably discharged’ with an incurable inability from the Protectorate (witches’ ruling authority) because she couldn’t kill a demon. No longer an agent of the Protectorate, Alma had to find other means to earn a living, so she now sells magic-infused beads made of redwood.

Her world is turned upside down when she finds her ex-boyfriend, Tristan dead on a bridge at night. The plot thickens after the sudden visit of her infamous father, a notorious thief accused of stealing a powerful artifact and the Protectorate tries to pin the murder on Alma. Her only chance is to find Tristan’s killer and clear her name.

The demon she failed to kill still visits her from time to time and shamelessly flirts with her.

“I like what you’ve done with your hair,” he said, gracefully dancing out of the way. “The natural curls go with the wild-witch-in-the-forest thing.”

“Just because I didn’t kill you that night doesn’t mean I won’t hurt you now.”The smirk faded from his lips.

“All right. I couldn’t resist. I heard about the Protector’s death and had to see if it was true. I came to see you because…it seemed polite.”

I went over and cleaned up the remains of the towel, this time dumping it in the trash. “Courtesy accomplished, now you can go home and celebrate. Set your own towels on fire.”

“Let me comfort you.”He held out his arms in a display of faux paternal comfort that was even less convincing than my father’s had been.”

Dead Witch on a Bridge manages to combine fantasy and mystery in a magic book filled with wonderful characters, none of which is what they seem. What I enjoyed most about the story was its lack of predictability. Friends aren’t always friends and enemies aren’t always enemies. It was a real page-turner, and I’m looking forward to reading the next book in the series.