A Spell to Die for by Gretchen Galway - Book Review 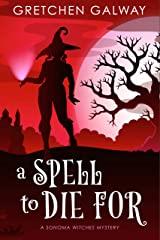 A Spell to Die For is the third novel in the Sonoma Witches after Dead Witch on a Bridge and Hex at a House Party. Another 5-star rating for Gretchen Galway’s witch mysteries. Although it can be read as a stand-alone, I urge you to read them in order.

The main character, Alma Belrose, is a witch with an incurable inability to kill demons. She has been honorably discharged from the Protectorate. Although she’s no longer an agent (the official name of a demon-hunter witch), the Protectorate often enlists her help solving murders. They don’t ask nicely, not that she would agree if they did, they leverage her to do the work for them.

I love how Gretchen Galway has developed Alma’s character gradually throughout the three books, and I look forward to seeing the character developed further in the series. Some of Alma’s mysteries are unknown, even to herself.

Having been raised by a single father with questionable morals, an infamous thief who refused to talk about her dead mother, Alma discovers her true nature bit by bit.

A Spell to Die For reveals more about Alma’s past, her strained relationship with her father, and the mystery surrounding her mother.

The supporting characters are endearing, and their story blends well with Alma’s story arc. I love both Birdie and Seth. Birdie didn’t know she was a witch until the previous book, Hex at a House Party, and now, Alma teaches her how to control her power and do magic. At this point, her magic is still weak, but Birdie is getting better.

Seth is another of my favorite characters. He’s a changeling, and according to the Protectorate, he should die, but Alma’s inability to kill prevented his demise. He is now Alma’s neighbor and friend. She worries about him often and even goes to great lengths to hide his existence and keep him alive.

He shrugged. “You’re doing that thing you do again.”

His nonchalance annoyed me. “Keeping you alive?”

“Suffering in a future that may never come.”

Another excellent side character is Willy, the gnome living in the redwood tree in front of Alma’s house. He is always polite and well-mannered but more powerful than anyone realizes, including Alma. He is fond of her and protects her by threatening/attacking anyone who tries to harm her. Alma offers him treats and springwater (with magical properties).

We don’t know much about his magic powers, but it’s hinted that witches fear him. When two Protectorate agents come to her house, acting aggressively, he sets them in their place instantly. That was a fantastic show of force but very satisfying to read.

“Witch Bellrose, forgive me for disrespecting you. I vow I shall never do it again.”

I risked a glance over my shoulder at the redwood tree. Was it me they feared or my gnome neighbor? The tiny glow was gone. Job done, Willy had gone back to bed.

And last but not least, comes Jen, the genie who fulfills wishes for a cost. She has a wicked sense of humor and is one of those quirky characters you can’t have enough of. When all goes south and Alma’s hometown (and Jen’s current residence), Silverpool is about to be burned to ashes, she can’t do anything to save it unless someone wishes for it specifically and pays a fair price. Her attitude and movie reference makes it a fun read.

“Can you do anything to stop it?”

She lifted her beer and sipped it, then shook her head. “Can’t pay my own price. Paradox in the space-time continuum.”

And last but not least, expect incredible world-building in such a believable manner that witches, demons, and fae could be living amongst humans, and we wouldn’t have a clue.

Also, the plot twist at the end was fabulous. I did not see it coming, and now I want more.

I can’t wait for the next installment in this mysterious witchy series.