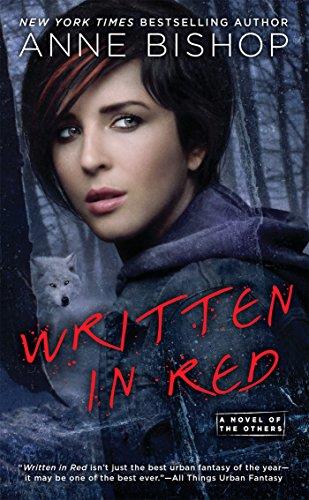 I got Written in Red, by Anne Bishop as a Christmas present from my husband and I was happy to discover a new fantasy writer whose books I can devour. At this point, I hadn’t read anything written by this author, so it was all new to me. Written in Red is the first book in the Others series and now, as I’m writing this review, I’m already knee-deep in the third book. I hope this answers any questions about whether I like this series or not. Naturally, there will be more reviews to follow.

Anne Bishop created an Earth-like world called Namid, its indigenous population called terra indigena that includes all the supernatural creatures you can imagine (so far vampires, wolf-shifters, bear-shifters, crow-shifters, hawk-shifters, elementals, and so on) and humans who are their prey. There is a lot of information to wrap your head around and it can be a bit off-putting if you’d rather jump straight into the story.

There are a couple of pages explaining the history, places, and names. They use different names for continents (Tahisia is their version of North America), and also different names for days of the week and months. Honestly, I found that annoying and didn’t bother to learn them. All I remember is that instead of Monday they have Moonsday and instead of Sunday it’s Earthday. There are also maps at the beginning of the book showing the cities of this world. I’m more action-oriented so I looked forward to getting into the midst of everything rather than being able to pinpoint on a map where it happened.

So, in this made-up world, there is an uneasy truce between predator and prey. The Others (terra indigene) tolerate humans up to a point due to their technical skills and inventive talents. The Others often refer to humans as smart meat, or monkeys and have no qualms about eating trespassers.

That being said, the book starts with a demure, half-frozen human young woman, Meg Corbyn, showing up at Lakeside Courtyard, the business district operated by the Others. We later find out that she’s a cassandra sangue (blood prophet who can see the future when cutting her skin) who has escaped the Controller and seeks refuge in the only place where human law does not apply. No one dared to enter the Courtyard without an invitation. Even Meg noticed, not without humor:

“People who entered the Courtyard without an invitation were just plain crazy! Wolves were big and scary and so fluffy, how could anyone resist hugging one just to feel all that fur?

“Ignore the fluffy,” she muttered. “Remember the part about big and scary.”

Simon Wolfgard, the leader of the Others in Lakeside, despite being uncomfortable having a human in his territory, gets protective of Meg because she doesn’t smell like prey. Once he finds out her secret and the lengths the Controller is ready to go to enslave her again, Simon has to figure out if protecting Meg is worth the war she has brought to his door.

The Controller breeds blood prophets like cattle and sells their prophecies for profit.

“Whether you’re beaten or pampered, fed the best foods or starved, kept in filth or kept clean, a cage is still a cage”

The story doesn’t have a romantic subplot but does set the ground for it, perhaps later in the series. I’m glad this doesn’t have an instant romance like so many fantasy books do these days.

“He kissed her forehead and found the act pleasing for its own sake. And, he admitted as he licked his lips, it was enjoyable for other reasons. Meg wasn’t biteable, but he really did like the taste of her.”

“The sweatshirt was big on her and she looked ridiculous. He liked it. And he liked that she was wearing something that carried his scent.”

Most social activity happens in a book store connected to a coffee shop. Only a bookworm would appreciate this detail.

“Vlad looked around. “Are we providing shelter, or are the humans actually buying books?”

I won’t give away more of the plot so I won’t spoil the book for you. Despite preferring fast-paced stories, I learned to appreciate a slowly developing plot, rich with details, humor, and sometimes morally flexible characters. It’s not a fast read, but it’s a book that’s hard to put down.