With Fire In Their Blood by Kat Delacorte - Book review 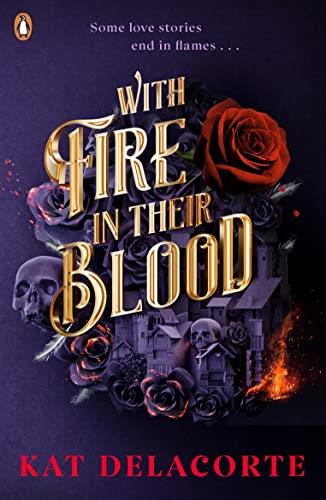 I'm reviewing With Fire In Their Blood for The Write Reads Blog tour, and I thank the organizer, the author, and NetGalley for making this possible.

This is a dark fantasy, so if you're a sensitive reader, please consider the following before starting to read:

With Fire in Their Blood starts almost like a fairytale with the arrival of the MC, Lilly Deluca, in Castello—an Italian town shrouded in mystery where her father got a new job. The fairytale vibe is dispelled soon enough as we meet the other characters, Lily's classmates, and learn a bit of the town's history.

Much like in Romeo and Juliet, the town is split in two (in the past, it was quite literally divided by a wall), and each half of the town is ruled by a family, one by Paradisos and the other by the Marconis. The town is governed by the General, and the peace between the two sides is frail at best. According to the truce, crossing the boundary line is illegal, considered treason, and would earn the trespasser a death sentence. Things get a little muddled for a while. An annual dance is the only occasion where the two sides are allowed to mingle. Of course, violence ensues; from what I understand, that happens every year. Why would the General allow an event where people who hate each other can legally assault one another? Although it seemed that the aggression was one-sided. I also didn't understand why those abused would attend the party yearly (unless it was mandatory and I missed it).

As you probably guessed by now, there will be some trespassing, but I won't give any spoilers. Kat Delacorte created a haunting setting for her story and put the characters through the wringer. It took me a while to get into the story because I found it hard to connect with Lilly. But I imagine it would be much easier for a teenager. If you can suspend your disbelief, you will thoroughly enjoy this story.

The mystery, the original twist on mythology, and the character's struggles kept me engaged almost the whole time. The story is full of plot twists, some predictable, some not. The unique magic system, the dark and Gothic vibe, and the harrowing reality of life in Castello make for a compelling read.

Each character is unique and multi-dimensional and has past traumas that shaped them into what they've become. This is revealed bit by bit as the story unfolds. For those who enjoy a diverse cast, I'm happy to say you'll find diversity well casually represented in this story. Towards the end, as more and more is revealed, I found it a bit odd, but my disbelief was well suspended by this time. If I could believe that in a small town in Italy, someone could rule the population as he pleases, kill children, and anyone who breaks his rules, and no authority would find out or intervene, then I can also believe that no one is straight.

What surprised me the most was that after being forced into the cultish system of Costello, Lilly, who was an American citizen, didn't fight back even once. Not that it would have done her any good, but it made sense for her at least to tell someone, 'Hey, I don't know how you do things in here, but I'm an American citizen. I have rights! You can't just test my blood and kill me if you don't like the results.' But that's just me. I see things through the eyes of a middle-aged woman, not a teenager.

All in all, this was a very engaging story. Although there were bits and pieces that I found hard to believe, I still gave it four stars because I enjoyed it. The entertainment value of a story is the most important thing I look for in a book. There was never a dull moment.

I recommend With Fire in Their Blood to those who like Dark Fantasy, Dystopian worlds ruled by the mafia, and an overall eerie Gothic vibe.