Warrior of The Stars by Elle Lewis – Book Review 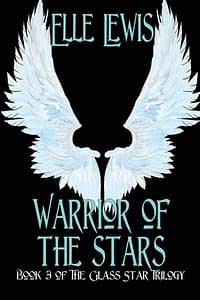 Warrior of the Stars is a phenomenal way to end the Glass Star Trilogy and well deserves a 5-star rating!

It's the third and final book in this series after Dark Touch and Genesis Rising. In this installment, we finally learn what Sloan’s true purpose is. Get ready to explore new worlds of the Universe far away from Earth and ancient civilizations as Sloan follows the will of Genesis.

I can’t review this book without comparing it to the other two in the trilogy. Although I loved the first two just as much, I think this is the best. Most of the story happens off Earth, so we get to enjoy vivid descriptions of other worlds in the Universe.

Before the tragedy that spurs her departure, Sloan has to deal with her own transformation while hiding it from those she loves.

“While still gripping the sink, I let my wings emerge. They filled the small bathroom, so large they spilled into the shower and tumbled through the open door. I summoned Genesis, allowing my Energy to pool in my hands. It undulated and sizzled, two balls of brilliant light, the color a mixture of iridescent pearl and light blue. I examined my reflection. The figure in front of me was otherworldly. Almost…alien.

An alien with dinner plans in downtown Seattle.”

Although in the first two books we are lead to believe the Dark Ones are the villain of the story, the truth becomes more nuanced as we delve into Warrior of the Stars.

“Sloan, the most important thing I want you to take from this conversation is that this Universe is not so easily split into good and evil. The fact is— Dark Energy is what strengthens the fabric of this reality. It is the reason Dark Ones convert living creatures. This Universe needs large amounts of Dark Energy to survive, and that cannot be changed. Dark Ones, Warriors, they vary as individuals.

A Warrior can be evil and a Dark One can be noble. Do not judge by Dark vs. Light. See the thought processes behind action. A Warrior can be blinded by his loyalty to the light. These paths of ultimate light or ultimate darkness are volatile.”

The story approaches the theme of balance in the universe. It’s not all black and white and it isn’t always easy to distinguish between friends and foes. It’s Jude who guides Sloan through this journey. Also,  Sloane’s journey is impacted by the loss of her friends and the death of her mother. Learning to communicate with Genesis and interpret her visions isn’t a walk in the park either.

Jude intrigued me in Genesis Rising and it slowly became my favorite side character. He’s not a fan of Earth’s blue pants aka jeans. I wish I’d seen more of Nyx. I loved her in Genesis Rising, but her appearance and interactions with Sloan in the last part of the book made up for it.

The world-building was exceptional and the best in the trilogy, mostly because a great part of the story takes place on other planets.

I would love to have a little oolah for a pet

“The oolah’s little tail wagged back and forth. It took a few quick steps towards me. I scooped it up, my heart melting. It’s fur, which was the color of pink cotton candy, was extremely soft and fluffy. It was tiny, the size of a kitten. Its ears had long tufts of fur sticking up, reminding me of a lynx. Its heart shaped nose was also purple, matching big luminous purple eyes. White stripes zigzagged along its coat.“

The balance of forces shifts when Sloan discovers she can control the energy which gives her a deadly advantage against The Dark Ones and other warriors. There are factions of Warriors who want Sloan Dead, but Sloan decided to take the risk and follow Genesis deeper into the Univers.

I love how Elle Lewis ended her journey. Without giving away spoilers, it’s not something you can figure out from the start, so it’s unexpected but gives you the closure you need in a very satisfying way. And just in case you’re wondering, yes, it has a happy ending!