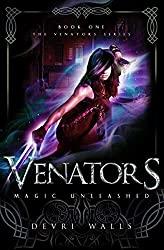 Venators, by Devri Walls is my first encounter with this author, but given how much I enjoyed it, I’m sure it won’t be the last. Her writing style is fluid, without many embellishments, which helps with the fast-paced action of the story. I found the difference between the two realms exciting.

The story starts in the human world with relatable situations such as family problems, frat parties, and getting drunk. The world as we know it disappears once we get to Eon, another realm, a different reality where every mythological creature you could imagine is real and hints towards a rather medieval setting.

We encounter shifters, succubi, incubi, vampires, goblins, and even a fire breathing dragon. The intricate storytelling, characters, and world-building reminded me of Kingdom of Exiles, by Maxym Martineau, which I reviewed last year. However, the action and fight scenes surpassed anything I have ever read before, both in intensity and creativity.

Character-wise, I connected with both main characters, Grey and Rune, and loved to watch them come into their powers. They are like different sides of a coin. It’s hinted that Grey is an abuse survivor, broken inside but puts up a brave front. He’s trained hard for years, he is physically strong but hides under baggy clothes and doesn’t open up to anyone.

Rune, on the other side, seems to have it all, but deep down, she crumbles under her family’s expectations and the perfectionism forced upon her by her mother. Her allegiance to her twin brother, Ryker, who acts like a jerk all the time, is hard to relate to.

They are venators (the Latin word for hunter – for once I was happy I studied Latin in school), genetically enhanced humans who hunt the supernatural being. The Venator markings, intricate tattoos are dormant until they come in proximity of a supernatural creature. That’s when they activate and start glowing red and green from underneath the skin.

Besides the venators, I loved the supporting characters Veridia and Tate, and last but not least, Beltran, the shapeshifter with a trickster mindset, and I’m confident a hidden agenda.

Devri Walls lightens the mood with bits of humor and even sarcasm, especially when describing the characters.

“Rune faced down life with all the reserve of an attacking polar bear.”

“I’m sitting on the outskirts of a black faery forest that’s filled with little demons. I’m great. Thank you for asking.”

Verida is an enchanting character, smart, sassy, and cunning. I noticed a certain similarity with Pam, the vampire from The Southern Vampires Mysteries by Charlaine Harris.

Before introducing Rune and Grey to the council, Verida shows them pictures of the council members, so they’ll know who’s who.

“The next image was so stereotypical it was almost comical.

She shrugged. “I wasn’t.

Perhaps that matter-of-factly tone is why I thought of Pam.

Rune and Grey get tangled in a web of deceit and politics at the Council. They need to learn how to feign playing along to survive because if the council can’t control them, they’ll kill them.

“The council wants to control us, just like they control everything else. They want to be in charge of what we do and who we serve.

Tate shot her a side glance. “That took you entirely too long to put together.”

Rune glared back. “Oh, I’m sorry. In my world, I don’t usually wonder if everything I meet is a shape-shifter in disguise. Forgive me if it wasn’t my first thought.

The second part of the book is one fight after another, close calls, and dangerous situations sprinkled with teasing and light-hearted banter.

Beltran’s retorts always bring a smile to your face.

“Your gratitude is overwhelming.”

“I already said thank you.”

“Yes, you did. Although the words had a nice bite at the end.

“Are we heading back to the council house, or are there any more suicidal stops you had in mind?

One thing that I didn’t quite like because it pulled me out of the story was the use of too many ellipses in the first part of the novel.

As the story progressed, either the ellipses were used sparingly, or I was so engrossed in the adventure unfolding before my eyes that I stopped noticing.

As you can tell, I loved reading this story, and I look forward to the sequel. I received an ARC of Venators, Magic Unleashed, as part of this fantastic Blogtour brought to us by The Write Reads.