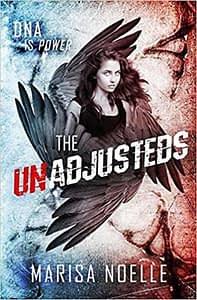 I thank the author and The Write Reads, the organizer of this wonderful book tour for a copy of The Unadjusted. My opinions are my own.

The Unadjusted is an interesting blend of fantasy and science fiction in a dystopian setting.  The premises of the story remind me of Cynetic Wolf by Matt Ward. We have fantasy creatures but they are not based on magic. Instead, they’re enhanced humans. So, fairies are actually humans with butterfly wings —and most cheerleaders chose to become fairies,  Due to advanced technology, by taking a nanite pill that contains animal DNA, humans developed certain animal traits like wings, horns, scales.

“A girl with swan wings tunnels past me, her feathers brushing my cheek as she takes off toward the school. A boy with scales stumbles and falls onto me. I regain my balance and continue fighting my way to the front of the growing crowd.”

However, taking the nanite pill isn’t without risks. There have been many instances where people didn’t react well to it and died.

“I look toward the dying boy as his body convulses. He took the bulk nanite pill. He wanted to be a football player, big and strong and immortal with rock-hard skin. It’s a level ten nanite. The paperwork involved takes months, not to mention the expense. All for nothing. His body rejected the change. It happens sometimes.”

The main character, Silver is one of the few who is still 100% human — unadjusted in a world where 80% were enhanced. She has strong moral values for someone so young and is determined to fight for her rights. Her mother is imprisoned for refusing to work on the nanite pill and her father is forced to do just that so Silver won’t become an orphan.

“I refuse to live in a world where genetically enhanced abilities are valued more than kindness and compassion. I’m determined to find a place away from it all.

“I won’t let something like that define who I am. I am enough, just how I am.”

It all becomes a political thriller when president Bear declares that all unadjusteds above 12 years old are required to take the nanite pill and failure to do so will result in “unfortunate circumstances”, forcing Silver to flee the city with an invincible army on her heels hoping to make it to the rebels.

Silver is a strong female character, and I don’t mean she’s strong in a physical way, quite the opposite. Being unadjusted often seems like an uphill battle but she picks herself up by the bootstraps and goes on. She values family, she’s stubborn and loyal to a fault. It makes you root for her with every page you read.

I recommend this book to all fantasy lovers, especially to those who love a good dystopian adventure, the underdog trope, unlikely allegiance, betrayal, and a kickass female character with strong morals values, and wise beyond her years.

The writing is clean and fluid, but I wish it had a little more showing than telling. Another aspect I wish was better written were fight scenes. I’m no expert but escaping such battles almost unharmed isn’t very realistic. Other than that, this is a gripping story That will keep you engaged until the last page.