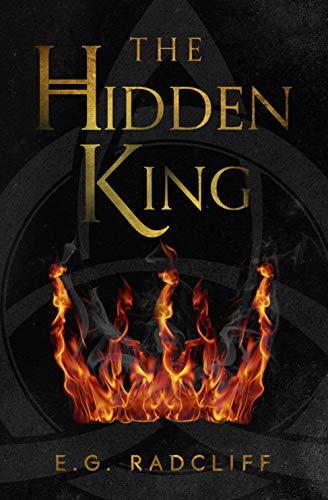 I'm delighted to review another enticing story courtesy of TheWriteRead's blog tour. This time I bring you The Hidden King by, E.G. Radcliff

The Hidden King is a young adult fantasy and the first book in The Coming of Áed. The story follows Áed; a young man stuck in Maze—a rundown city at the bottom of a cliff with no mercy for the weak. Áed lives with his partner Ninian and their adopted son Ronan. A tragedy pushes Áed and what's left of his family in the aftermath of a tragedy to flee Maze and seek shelter in White City—the city atop the clifftop which holds the promise of a better life. Along the way, he makes allies, enemies and discovers his origin.

The writing was fluid, the descriptions atmospheric, and the characters relatable. There's a tragic twist at the beginning of the story, but I can't say more without giving away spoilers. I found it easy to read, well-paced and engaging. This is a character-driven story, so don't expect much to happen plot-wise. I wish it had a little more conflict, but that's just a personal preference.

What kept me reading was the combination of comedy and action, sprinkled with profound moments to achieve a perfect balance. There were some highly emotional scenes and a bit of sarcasm to break the tension.

As far as tropes go, the title is a spoiler. I think you can guess who the hidden king is, but if you can't, I won't spoil it for you. So, we have the secret royalty trope, which is always fun to watch unfold. Also, the chosen one is another popular trope in fantasy.

Readers who want more diverse stories will enjoy The Hidden King. The book features a well-written m/m relationship, disability, and being adopted.

Keep a box of tissues nearby. This is a bitter-sweet story that will pull at your heartstrings. I recommend The Hidden King to all fantasy lovers, especially those leaning more toward high and dystopian fantasy.