The First of Shadows by Deck Matthews – Book Review 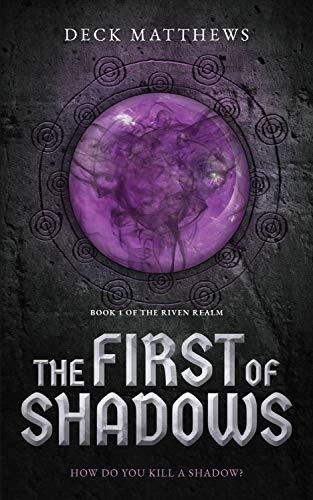 The First of Shadows is the first book in The Riven Realm series, by Deck Mathews. Reading it felt like watching a movie. The scenes are written vividly in a cinematic style that feels very modern. From the beginning, you get a high fantasy vibe that is maintained throughout the rest of the book despite the low number of pages (low for a high fantasy).

“The world was a wash of dingy stormlight as the drifter clambered up the craggy bluff. A thick bank of clouds loomed in the east, roiling in from the Boundless Sea, black and bleak grey, streaked with shifting veins of purple and yellow and orange.”

Deck Mathews’ debut novel is written as seen through the eyes of three main characters. At first, their POVs and separate storylines were a bit confusing, but they ultimately all tie into each other, so be patient, it’ll make sense in the end.

The book starts with the POV of a mysterious drifter named Shem. We delve straight into the action when Shem gets attacked by a demon. The story hints that they have fought many times before and the demon takes many forms.

“The demon clambered up over the blasted ridge with massive, overgrown paws. It had shed the visage of the pale-skinned woman and came in the shape of a wolf. Dark and twisted, it stood taller than a crag hound. A thick bramble of coarse fur grew around its neck and shoulders like a mane of overgrown bog grass. Eyes as dark as onyx glistened beneath a gnarled brow. It bared its fangs, twisting its blackened lips in a cruel imitation of a humourless smile.”

The second character whose POV we get to see is Caleb Rusk, a man with a physical disability who works as a rigger on an airship. Because of his disability, Caleb gets bullied often.

The third POV we see is Tiberius, a wizened blind sage. He’s been traveling through Varkas for ages in search of rare and very ancient forms of magic to hide them from those who would use them for evil. When a series of mysterious deaths occur, Tiberius is asked by the Ember Throne to help Avador, an officer of the military guard to get to the bottom of it.

The world-building is immersing. It made me visualize a medieval fantasy setting with a quirk. Deck Matthews leaves his print with the addition of airships into this medieval-like world.

The First of Shadows has an intriguing and complex magic system that hasn’t been fully explained and explored in this book. With the fast-paced rhythm and a plethora of characters, it’s surprising that Deck Mathews managed to keep it this short. I assume will find out more in the next books.

“Traditional wisdom held that there were six branches of the arcane arts. The Flame was the blessing of Mischa, the White Rukthar, and the one true magic in the eyes of the Sanctum. The so-called heathen melding magics were practiced by the magi of the Karinth. There was also the mysterious power of the Midderlight, the magics of the Fey and the forbidden arts of Shadowcraft. The Old Magic was the sixth form. Ancient and unpredictable, it was also the only form that was rumored to mix with the others.”