The Beast and the Bethany by Jack Meggitt-Phillips – Book Review 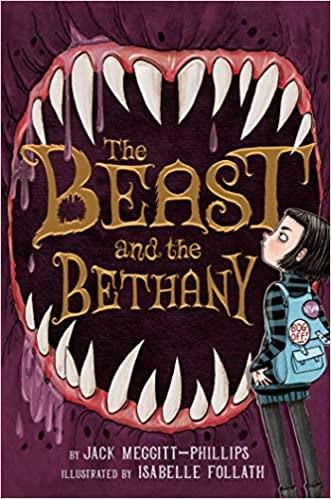 The Beast and the Bethany is a middle-grade fantasy story in which all the main characters are deeply (and disturbingly) flawed and fairly unlikeable. If we move past the witty and snarky comments, the story offers some valuable messages to the young readers. Mean, wit, snarky comments, but also some very valuable and important messages. Often ill-spirited, selfish, and cruel people are so because of their troubled pasts, but friendship can bring light to the darkest of souls. Well except for the beast, there is no redemption for the beast!

We have three main characters, all morally gray for different reasons who get a chance to redeem themselves through friendship.

Ebenezer sold his soul to the devil (in this case the beast), so to speak, for eternal youth. As such, at 511 years old he doesn’t appear older than 20. To receive the magic potion he has to feed the beast in his attic whatever it wants. This makes him greedy and emotionally detached since the time the beast requested his cat. Now he won’t get emotionally invested in anything other than himself.

The beast in the attic has been Ebenezer’s companion since he was a child. When Ebenezer found it, the beast was tiny and harmless and it grew because he nurtured it and fed it. In return, the beast offered him gifts. But the more it grew, the more it demanded, and although, usually the requests were random, meaningless objects, now it wanted to try a child and won’t give Ebenezer the magic potion until he fulfills the beast’s wish. Reluctant at first, Ebenezer agrees as soon as he sees the first wrinkles starting to form around his eyes. After failing to abduct a child at the zoo, he decides to adopt one from the orphanage. To ease his remorse, he picks the most ill-behaved child he finds there: Bethany.

Bethany is a bully, ill-mannered, and liked by no one. After having been returned by several families who tried to adopt her, the orphanage director is all too happy to be rid of her. Ebenezer takes her to the beast but instead of eating her, it wants to wait until she puts some meat on, being too skinny for the beast’s linking.

“Try not to be scared,” said Ebenezer. “It won’t like you if you’re scared.”

“If it tries anything scary, it won’t like me!” said Bethany.

“Ah, but not just any child. I said I wanted a juicy, plump child! I want one with lots of flesh that I can sink my teeth into, not this little thing that you’ve brought me. When I eat my first child, I want it to feel like a meal, not a snack, and I want to chew on more than just a sack of bones.”

Now, if he wants the magic potion, and he wants it badly, Ebenezer has the task of fattening her up.

“His first thought was that he should sneak into the hospital, steal some needles, and inject several packets of chocolate biscuits into Bethany. It looked like it was going to be a solid plan, right up until the moment Ebenezer remembered that he was squeamish around any sort of medical equipment.”

Trying to make her gain weight is funny. She loves antagonizing everyone but it doesn’t work as planned with Ebenezer. For instance, when asked what she wants for breakfast she says cake expecting to be denied and offered healthier foods. But Ebenezer doesn’t care and gives her exactly what she asked for happy that she’s eating and gaining weight. He craves the magic potion so badly that he feeds her several cakes when she asks for more just to spite him.

As days go by they bond and when the beast hurts her feelings he starts to reconsider feeding Bethany to the beast.

Throughout the story, both Bethany and Ebenezer grow as characters, and through their unlikely friendship, they become better people, capable of great sacrifice for one another. The beast, however, remains unchanged until the end.

“Ebenezer, I told you that I would help you control her. I never said that I would be nice about it.” The beast yawned. “Now leave me alone. I want to finish my sleep.”

The illustrations accompanying the events, brought the story to life, increasing the charm. I loved seeing the characters grow together and become better people. In the end, friendship saves the day and through collaboration good overcomes evil.