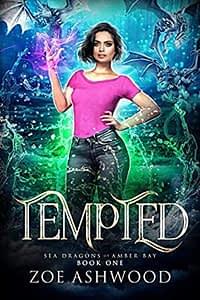 This is the first reverse harem I’ve ever read, and I must confess I didn’t expect to enjoy it as much as I did. Although hesitant at first, I picked up the book, thinking that if it makes me uncomfortable, I can put it down at any time. Guess what? Not only did I not put it down, but I binge read the whole trilogy in one weekend.

I debated whether to give it 4 or 5 stars and went with a 4-star rating for two reasons.

On the one hand, I’m rating it in context, and both book 2 and book 3 received 5 stars from me because, in my opinion, they are better.

I swear I almost pulled a muscle trying to get the next book fast!

There’s no secret that I love fantasy books. If you missed the name of my blog, check again! And while I absolutely adore the mythological creatures we are accustomed to, like werewolves and vampires (I have them in my books too!), I’m always excited to read about new ones. In this case, we have sea dragon shifters. How cool is that!

By the way, the series is titled Sea Dragons of Amber Bay and follows the story of Skye, a tech-savvy witch shunned by her family and coven who lands a mysterious job in a remote part of Alaska. She takes it as an opportunity for a fresh start. But Amber Bay is not an ordinary human village, and neither is her employer an ordinary human guy and at the end of the day, the job she’s been asked to do isn’t that ordinary either.

Tempted is a riveting story laced with heartache, secrets, angst, and intrigue. The constant need for secrecy keeps you by the edge of your seat as we learn what the stakes are.

The story is unique, the writing is fluid and engaging, and the characters are relatable. To be honest, I half expected the reverse harem to be cringy, but it wasn’t. The way Zoe Ashwood built up the character arcs and made them strong yet vulnerable at times made the relationships that emerged feel natural.

Also, let’s not forget about all the steamy sex scenes that were tastefully written and brought the relationships to a new level.

I love the characters, the humor, and the way the characters were portrayed throughout the story. I might read other books by Zoe Ashwood in the future.

The best advice I can give you is to BUY ALL 3 BOOKS at once. You’ll want to binge-read them, otherwise, there’ll be a lot of frustrations coming your way.