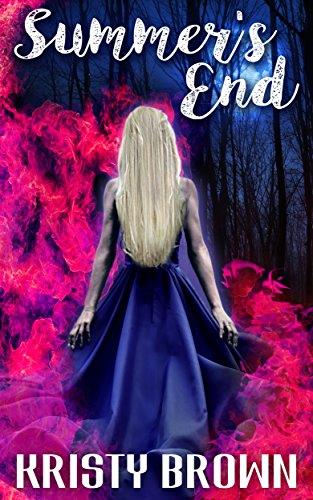 Summer’s End is the first book I read by Kristy Brown. It was also featured in the Book Recommendations section of this blog earlier this year. It was the cover that got my attention and the blurb hooked me.

Summer is a college student who wakes up in the hospital having survived a fire that burned down her house and killed her family. But she has no memory of it, actually no memory at all, she doesn’t even remember her own name or dead family.

The story picks up when her two best friends, that Summer doesn’t remember, start looking after her and at least apparently make efforts to jog her memory. I can’t say more about that without giving spoilers.

Meanwhile, we get to meet Dooney (whose real name is Alex Doones), a boy who was trained from childhood to kill her. We have a very little background for Dooney, except his people (we don’t know much about them, but they seem like a cult) indoctrinated him from an early age that he was the chosen one, the one who would kill Summer, the one who would otherwise burn down the world. He isn’t excited about the killing but feels like it’s his duty.

Killing is my gift. Would I have preferred a fishing rod or a racer? Hell yeah! But it is what it is.

Once he meets Summer he starts having mixed feelings because she is nothing like he expected, yet Dooney is determined to go through with the initial plan.

They have several peculiar encounters in which both react badly to each other and they are explained later in the book.

To be honest, I didn’t like Dooney, I couldn’t connect with the character and I found it hard to see any redeeming qualities in him. But it’s been a long time since I was a teen, what do I know?

“When it comes to her I’m greedy, I want the whole pudding and the frigging spoon too. So what if I want to take us further?

I just want to be a normal teen for once. I should get points, I mean I could ‘do’anyone, but the fact that I don’t…I should get some brownie points, right?”

Summer’s End is an intriguing story, with some shady supporting characters, a complicated love story that can’t end well (although, it’s been hinted that there could be a way, and I assume it will be explored later in the series).

One of my favorite characters was Andie, a no-nonsense blue-haired girl who had no ulterior motives. It’s generally a quick read, although there’s a lot of head-hopping and that takes some getting used to. Summer’s End has two POVs: Summer’s and Doony’s.

A web of lies and half-truths combined make the plot a bit confusing at times. But I have faith, that many things will be revealed later in the series. It was an overall good paranormal romance and it was refreshing to see a different mythology. I think teens would enjoy reading it.