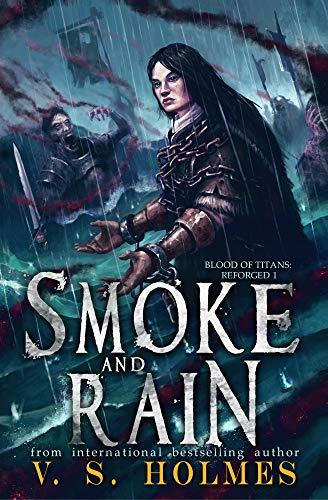 Smoke and Rain was the first book I read by V.S. Holmes, and I must say that at first, I had a love-hate relationship with the beginning of this book. I’ll start with the bad so that I can get it out of the way. I don’t have a lot of time to read, so when I read, I want to get immersed in the story asap. I’m not a patient person, sue me! So, soon after I picked up this book (about 60 or 70 pages in) I put it down and looked up reviews about it. It’s not one of those kinds of books that start with a hook.

This one starts slow, explaining things, introducing characters, and so on. You also have to learn some hard-to-remember names. Have I mentioned that I’m not a patient person? Upon reading several fabulous reviews, I discovered that despite being a bit slow in the beginning, it more than makes up for it afterward. I can now confirm this! So I picked it up again. It may not hook you right from the beginning, but when it does, it won’t let go!

The book starts with a calendar and maps to help you visualize this world and keep track of what’s going on. The story is written in the third person POV, so we get acquainted with each character's inner struggles and growth, which is nice. I think it’s impressive how the author managed to flesh out each character and give them appropriate page time. By the way, this is not a quick read, but quite a thick book, and I love how unpredictable and unique this story turned out.

The main character is Alea, dealing with survivor’s guilt in the aftermath of a tragedy and equally important is Aman, a weapon designer that becomes her guard. Both are troubled characters, easy to sympathize with, yet frustrating at times. There is no instant romance threatening the plot, which is awesome because it makes their relationship believable. It’s all based on friendship and loyalty.

The world-building in this novel was exquisite and immersive. The descriptive passages, which I sometimes find boring in other books, were epic in “Smoke and Rain”! You don’t have to take my word for it, here a random description:

“The trees were leafed in brilliant green and blossoms began to peek from vines. She did not see them. Instead, she saw shadow creeping into her thoughts. It hovered on the edge but she felt it grow.”

V.S. Holmes is more than a writer; a wordsmith would be a more suitable synonym. The way she describes things makes reading a very vivid and visual experience. Here’s another phrase (unimportant in the grand scheme of things) that caught my eye:

“Venom and fear soured his glare at Alea as he obeyed. She hoped he could not see her skin crawl”

“War brought legends and monsters scuttling out like wood roaches after a storm.”

I’m trying not to give away spoilers, so I’ll say this: this is an epic dark fantasy novel, so expect badass superpowers! Sweet Alea is not the damsel in distress you’d expect; she has some kick-ass magic going on:

“Swelling power broke from her body. Black fog exploded from her open mouth and filled the room with churning darkness.

The power rolling from the fort was not obvious at first. It crept across the ground like rising floodwater. Cold soaked into hands and boots, halting adrenaline and rage. Despite the rain, thirst crept up the throats of the soldiers, faint but persistent. Those closer to the blast watched droplets of water burst from their skin to skitter across the ground. Soon it was not just water ripped from their bodies, but lymph and bile and blood. Water trickled, moving even faster between the stones, and swirled up Alea’s legs. And each death burned through Alea’s mind”

Do you have goosebumps yet? Buy the book, read it and feed the fantasy monster nesting inside you!