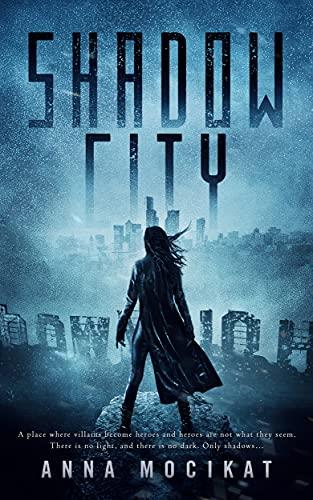 Shadow City is a gripping story set in post-apocalyptic Los Angeles, several decades after the Glitch. No one truly knows what the Glitch was, but due to a cataclysm that released toxic radiation, the world was damaged beyond repair. The dystopian world Anna created gives off a mixture of Mad Max and Resident Evil vibes.

“We don’t know exactly. We can only speculate. It came out of the blue, surprised us in our sleep. Probably a nuclear disaster that started a chain reaction… but as I said, it’s unclear. All government and communications structures were gone, there was no one to tell us what had happened, and there was no help. We were left on our own.”

After the Glitch, “endless thick clouds” hid the sun from the world and life went on in the shadow. That allowed vampires to come out once daylight was no longer a deterrent. Hard to believe but they’re the good guys in this story; most of them anyway. The few humans who survived the Glitch made a pact with the vampires. They live together in a protected area they call The Zone and have a blood bank set up where every healthy person above 12 years old has to donate blood for vampires.

In exchange, the vampires protect the Zone from monsters: radioactive mutants, gangs of raiders, and Dark Ones – mysterious beings that feed on human pain and agony and got here through a crack in the earth at LA s City Hall.

We experience the story from multiple POVs. Eric, the brooding vampire leader, Bombshell the cyborg (that Eric affectionately calls Bombie or tin can), Colton who has no memory of his past or his name (he was named Colton after the street he was found on), and Vincent who is possessed by another being and falls for a rogue vampire. That’s quite a team!

You’re thrown into the action from the get-go when a couple of teenagers fight mutants to save a stranger. Little by little, we get to meet the other characters and see them in action.

What I loved most in this book, aside from the action and quirky characters, was the relationship between the vampire and the cyborg and their constant banter:

“That’ s Bombshell,” Eric lifted his glass towards her. “We couldn’t manage without her.” “I know,” she said with a grin. “But it’s always a pleasure to hear it from your lips, vamp.”

When they’re under attack and need reinforcements, we learn that vampires can contact one another telepathically.

“He's calling for reinforcements,” Bombshell explained. “Don't look at me like that. I have no clue how this hocus-pocus works, but all vamps seem to be mentally connected somehow. One of the reasons we have so many of them in the HF. They’re like undead walkie-talkies.”

I loved Shadow City and I can’t wait for the sequel! I think Anna Mocikat did a great job creating a gripping dystopian world, well-developed characters, relatable villains, and an action-packed plot.

Another thing that got my attention were all the music references throughout the story. The fact that I have them on my playlist made me appreciate Anna even more (Metallica, Nirvana, Smashing Pumpkins and Nine Inch Nails are the first that come to mind).

Reading Shadow City was like watching an action movie with an awesome soundtrack. It was a good story with unexpected twists and a few emotional moments. You know it’s a good book when even after you finished the story you still think about it.