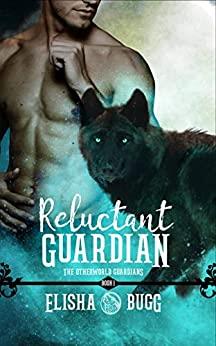 Reluctant Guardian is the first installment in The Otherworld Guardians series, a paranormal romance.

The first thing that comes to mind after finishing Reluctant Guardian is that appearances can be deceiving. The story starts with a masquerade ball where the protagonist and her future love interest accidentally bump into each other and they both feel an inexplicable attraction to one another.

What I thought would happen next? I anticipated instant romance and drama caused by egos and lack of communication. What actually happened? None of the above! Unexpectedly, the romance between Thane and Anya is a slow burn. There are some confusing reactions at the party on Anya’s part, but they will be explained in the end.

The story is intriguing, the plot intertwines the supporting characters’ storylines in a way that makes reading exciting. Bit by bit we learn new things about them and they are like puzzle pieces fitting together to reveal the bigger picture.

Thane is a wolf shifter but also a Guardian. His role is to protect the Lore (all the supernatural creatures) from the Hunters. The Hunters are humans who kill anything supernatural.

“The Guardians are an alliance that was formed centuries ago by several different factions of Lore. Each race involved sent forward their strongest warriors to become Guardians, fighters for the alliance.”

It’s not an easy task especially since he hates humans. His hatred seems overly exaggerated and may confuse some readers. It will make sense as you will read about his past. He fights his attraction to Anya despite knowing she was his mate because she’s human.

“She couldn’t be his. How could she be? She was human, the only creatures Thane considered to be monsters.”

Conflicting feelings aside, Thane is always there to protect her. Their occasional banter is endearing.

“It’s rude to sneak up on people, especially when it’s obvious they’ve had a bad morning.”

“Your night wasn’t going so smoothly either. You seem plagued by bad luck.”

Thane, the alpha male protagonist is dark and brooding but every now and then he shows his soft side in ways that make him relatable. Nothing is gratuitous. We learn by the end of the story that he has a dark past that shaped him into what he is today.