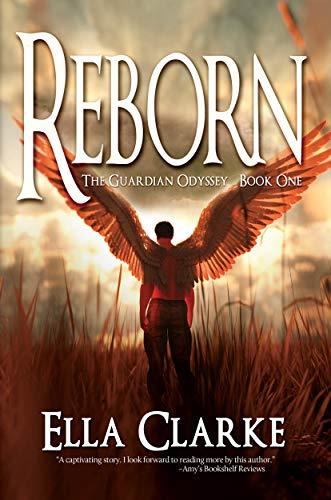 Reborn, by Ella Clarke, is the first book in The Guardian Odyssey Series and casts a different light upon the fallen angel trope.

One thing I love about this book is how immersive it is. Ella Clarke doesn’t beat about the bush, she throws you into action and hopes you can handle yourself. As I have mentioned in other reviews, I’m not a patient reader, and I’d rather figure out what happens through action rather than lengthy descriptions. Also, I find that starting the book with an action scene hooks the reader. I mean, it worked for me!

Reborn is almost like a coming of age story where the main character is an angel who has issues with authority and screws up his missions. Going rogue may seem fun at first, but his punishment is harsh. Kendi, our fallen angel, is stripped of all angelic powers and sent on Earth as a human teenager to be someone’s guardian angel. Should he fail, this is the end for him. Needless to say, he hates it!

I began backing away from him. This couldn’t be. I couldn’t even wrap my mind around being a Guardian. I hated it. I hated Earth.

To make his mission even harder, he is linked to his fellow Guardians. Because of him, they are all in danger. He hates that even more!

I don’t want to be responsible for the lives of my fellow Guardian. I haven’t even taken on that responsibility for myself yet. I’m sure you’ve heard about my glowing record.

Meeting Elle (Sarielle), slowly changes the way he views humans and gets to experience feelings he can’t even identify, although he’s been alive for millennia.

I felt bad for her, but I couldn’t identify the source of my remorse. Was it simply because I had such a high stake in whether Xavier lived or died, or was it because I was beginning to care about these humans that I was sentenced to protect.

Reading Reborn feels like a coming of age novel where Kendi, a troubled teenager, is forced to grow up in the face of imminent danger.

One thing that feels off about it is Kendi’s life experience. It doesn’t come through. He’s been alive for thousands of years and still has the attitude of a seventeen-year-old. I would have expected more maturity, wisdom, and patience. But what do I know about angels?

All in all, it was a good book, quick-paced action-packed. I enjoyed reading it!