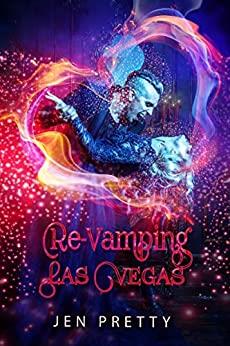 Re-Vamping Las Vegas is the second book I read by Jen Pretty, the first one being Gargoyle Huntress. That being said, I expected a fun read about a quirky vampire stirring up trouble in Las Vegas. I was only half wrong! Spoiler alert!!! Although it was an enjoyable read (not as fun as the Gargoyle Huntress), the unexpectedly sad ending put a damper on it. So be warned, it does not have a happy ending!

So, back to the book, we meet Nia (short for Lavinia), a 200 years old vampire who hates what she is and isn’t too fond of humans either. To keep boredom at bay, Nia uses her mad hacking skills to steal from scumbags and give the money to different charities.

One day while she remotely gains access to the webcam of her intended victim, she witnesses a vampire commit murder ( which is against vampire law) and has to relocate to stay alive.

“He dropped her lifeless form to the floor with a hollow thump and sucked in a deep breath. I could practically see his heart beating with the blood he had consumed, but draining a human was against the law. The Blood Guard would kill him for this — no trial. Ed was dead meat.

Ed’s eyes fell on the laptop. There shouldn’t have been any signal I was using the camera, but Ed yelled, and a few other vampires came into the frame.

“Get Donnie in here and find out who is using my computer!” he yelled, then he pointed at the camera. “I will kill you, you hear me? You are dead! “

Thus, Nia is sent to Las Vegas under the protection of Matthew, the vampire who rules the City. His protection comes with a set of rules that Nia keeps breaking.

In Revamping Las Vegas, vampires came out of the casket several decades ago and have already integrated seamlessly into society  (that reminds me of the Southern Vampire Mysteries by Charlaine Harris where vampires came out of the coffin in a similar manner). They don’t prey on humans. When needing to feed, they smile at humans showing their fangs, and in response, humans either tip their heads and offer their blood or flee at the sight of fangs. Here’s how a typical feeding session goes:

“I took his shaking hand and wrapped it around my waist. I put my hand on his jaw and I tipped his head to the side. His Adam’s apple bobbed nervously. I ran my fingers through his coarse beard. The whiskers gave way to soft skin at the bottom of his neck where it met his collarbone. I leaned in until my body was against his. I licked his neck low by his collarbone. The soft skin there smelled delicious. He shivered. Goosebumps rose on his arms, and his fingers flexed on my hip. His breathing sped until I thought he might hyperventilate. It had been known to happen. I took it as a compliment. I slid my teeth into his neck and he sucked in a quick breath, his body tensing before he relaxed into my arms. He was soft and pliant now. Boneless. His head lolled to the side as I drank from him.”

The story is entertaining and fun at times, sprinkled with flashbacks from Nia’s long life that help build the character and provide an excellent back story to understand her actions.