Protection of the Pack - Book review 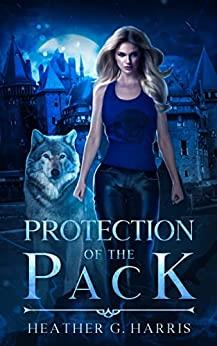 Protection of the Pack is another outstanding novel by Heather G. Harris. This is a spin-off to her original series, The Other Realm, where Lucy is a minor character. You don't need to read The Other Realm for this story to make sense, but I recommend you do that anyway to avoid missing out.

So, following an incubus attack and a fatal injury, Lucy is turned into a werewolf (that happens in The Other Realm series). Protection of the Pack follows Lucy's story as a newly turned werewolf (and Esme, her wolf) after unexpectedly becoming the pack's alpha.

There's never a dull moment, the story is fast-paced, the world-building well done (as already established in The Other Realm), and the characters multi-layered, well-written, and relatable.

Now that she's a werewolf, Lucy's life isn't any easier, and the challenges she must face are of the supernatural variety but also the old-fashioned corruption, murder, and betrayal. To earn the respect of the pack she now leads and to assert her dominance, she must first protect it and convince everyone to work together.

Besides Esme, one of my favorite characters is Manners, who becomes Lucy's beta. I already liked his appearances in the previous books, and I'm glad we got to see more of him. The pack wants neither him nor Lucy, and things get worse when Mark, number 3 in the pack's hierarchy, is found dead, and clues indicate it's an inside job. An impromptu visit from the Werewolf Council puts pressure on Lucy and Manners to solve the murder and protect their pack.

Like any murder mystery, clues are uncovered step by step, with dangers and threats at every corner. Will Lucy pull through? There's only one way to find out.