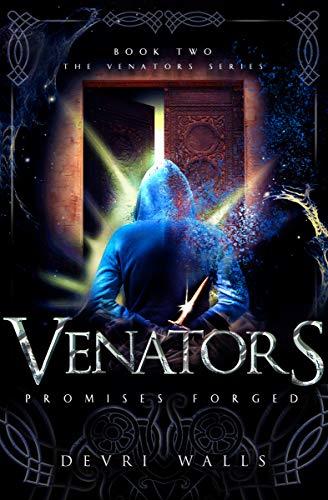 I enjoyed reading the Venators’ second installment a lot and I can say without a doubt that it’s a 5-star book, in my opinion.

My review of Promises Forged

I read the first book in the Venators series a while back and I fell in love with the characters so I was looking forward to seeing what happens on Eon so I jumped at the opportunity to read and review Promises Forged.

The story picks up right where Magic Unleashed left off and we follow Rune and Gray’s adventures while they are struggling with their Venator legacy. Everything happens in a web of politics, secrets, and dangerous half-truths.

Promises Forged takes place entirely on Eon, an alternative dimension where all the mythological creatures imagined on Earth are real. Gray ends up in the one place he shouldn’t have.  The Fae capture and imprison him at the queen’s court. Gray soon learns that this is no ordinary prison! Feena’s throne room is gruesome as is impressive.

Feena is a powerful queen whose strange feeding habits increase her magic. I won’t elaborate to avoid spoilers. So far, the Fae’s territory and the things happening there are the most fascinating part of the book. Devri Walls is particularly talented when it comes to descriptions making everything vivid. The story gets darker.

Council politics are as expected messy and surrounded by mystery. When Rune asks the council for assistance to save Gray she is denied. Fortunately, Beltran, Tate, and Verida come to the rescue. They teach her more about politics, customs, and how to play the game. All the dos and don’ts to at least get permission to leave on a rescue mission.

For that, she must learn their rules and their habits. She also must learn to dance and participate in a ball thrown in the venators’ honor.

What I loved about Promises Forged

The world-building is unique and immersive and I was immediately enthralled by Feena’s land and its magic. Apart from that, I’m happy to see more of Beltran, a character that won me since Magic Unleashed.

Gray’s journey took an unexpected twist and I loved to see Rune grow as a character. She struggles to balance her Venator role, her desire to find and rescue her brother, Ryker from Zio’s claws, and Gray from Feena’s. It’s a lot to shoulder for Rune which makes for great supporting characters.

The Fae queen is a reputable villain with a fascinating magic land and Gray discovers that his compassion is not a hindrance but a gift.

Then came the most beautiful realization of all—one he never would’ve found had he not been looking. Her life will be better because I was here.

Gratitude, happiness, and a feeling of humility so strong that it, in and of itself, humbled him washed over Grey, and he glowed from the inside out.

“I’d almost given up,” Feena said.

Grey opened his eyes to see himself surrounded by flowers. Pink with silver striations running through the petals. Elegant yellow roses and pale-blue petals with mauve stamens.

There are more books to come in the Venators series and I look forward to reading them. The next installment is Legends Rise and is supposed to come out in September 2020.