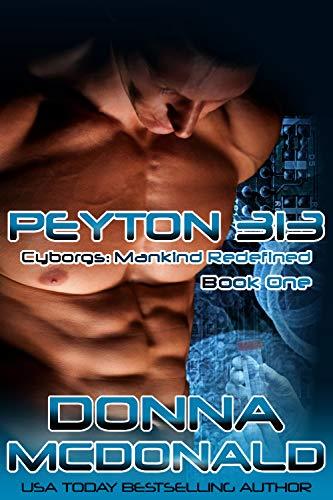 I got this book on a fluke because Book Cave recommended it. I have previously read and loved Laurann Dohner’s Cyborg series, so I was intrigued. Also, this was the first book I read by Donna McDonald.

I’ll start by saying that I enjoyed Donna’s writing style. She certainly knows how to build anticipation and keep you wanting for more. Peyton 313 was a real page-turner.

By the way, don’t be fooled by the shirtless guy on the cover ( it’s the norm for books in this genre), it’s not erotica! There’s romance and plenty of shameless flirting, but not much sex.

That being said, I’m glad I discovered this author, and I look forward to reading more of her books.

Peyton 313 is the first book in the Mankind Redefined series. The premises of the book is fascinating. The plot is set in the future where humanity developed cyber soldiers to win a war, and afterward, instead of being freed, they were reprogramed and sold as slaves for corporate profit.  Dr. Kyra Winters, one of the original creators of cyborgs, wants to restore their humanity to ease her guilty conscience. The plot twists are entertaining, and the sense of humor and friendly banter make Peyton 313 a compelling read.

“Flattery will only cause you problems you don’t want. Sleep tonight, Dr. Winters. We’ll resume our sarcasm swap in the morning.”

I liked Peyton as a male lead character. Definitely an alpha male but minus the caveman traits that most fantasy/paranormal romance books tend to overuse. Also, Kyra, the female lead character is a strong woman who doesn’t lose her backbone the moment Peyton gets her attention. Such a break of pattern is refreshing.

Peyton is a cyborg, and sometimes the humor stems from glitches. You can’t read that with a straight face.

“Please don’t look so alarmed, Doc. I find you very pleasing to stare at for long periods of time,” he said. For some reason, his compliment struck her as incredibly funny. “I’m sorry I’m laughing, but you’re supposed to say you find me beautiful, Peyton.”

The restoration brings out a more human side of Peyton that is kind and empathic. His efforts to comfort the “evil doctor” don’t go unnoticed either.

“Doc—you need to face the facts. You’re just not the evil science bitch you think you are. Last time I checked, the bad guys don’t usually cry over their victims. Only the good guys ever cry, and they do it even more when no one is around.” “You don’t cry,” Kyra said. Peyton laughed. “That’s because I have cybernetic eyes. Plus I’m male. My first response to most trauma is to beat on something until the situation improves.”

Self-deprecating humor and a straight backbone make Kyra a delightful character. She’s smart, sassy, and fair but she’s not a pushover. Even when overwhelmed with guilt, she doesn’t cave.

“I need to go change into my evil science bitch clothes and put my lab coat on. I wouldn’t want the world to get the wrong idea about me.”