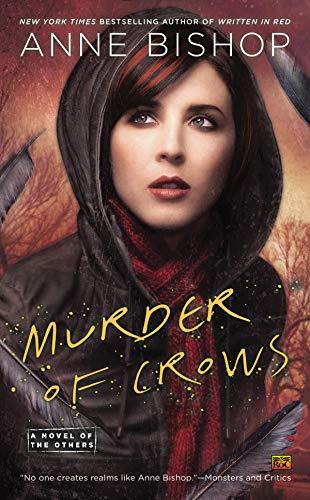 The story picks up where it left at the end of Written in Red. The plot of Murder of Crows develops around the slowly escalating conflict between the human population of Lakeside and the terra indigene living at Courtyard.

Once she has won the trust of the terra indigene, Meg Corbyn has to adjust to living amongst them. What breaks the rhythm are the drugs “Go Over Wolf” and “feel good” that appear to affect both human and terra indigene. They were introduced in the first book, and their use sparks violence between the humans and the Others. Meg Corbyn, the resident cassandra sangue has dreams that foreshadow the impending danger. People die on both sides, and the vulnerable truce that was once in place gets broken.

As you can assume, some crows get killed in this book. An investigation shows that they were poisoned with the drugs mentioned above. There’s an important plot twist where the reader learns what goes into making these drugs. I’m not going to say it so I won’t give away any spoilers, but it’s pretty twisted and gruesome! The cassandra sangue play an important role in this string of events, and the Controller goes to desperate lengths to reacquire his property. As suspected, that doesn’t happen.

One thing that disappointed me in this book was the lack of a story arc to give it shape and structure. Although the plot is interesting, otherwise I would have put the book down and forgotten about it, it lacks build-up, curve, or climax. There’s a string of events, some more interesting than others, but no real ups and downs, no change of pace.

Sometimes it feels like it’s dragging with unnecessary details, fillers to bulk up the word count. For instance, the story focuses a little too much on stuff like dog biscuits and cuddling on the sofa watching movies.

“Maybe you should go home and rest,” Simon told Meg. Maybe he could go home with her and they could cuddle for a while or play a game. Or she could watch a movie and pet him. “Merri Lee is helping me make some sample packages of cookies,” Meg said, sounding like the only game she wanted to play right now was whack a Wolf.”

But the constant banter and the funny moments make up for it. The story is abundant in humor and snark:

Meg stifled a sigh. That would be the first thing on her feedback list: don’t make people-shaped cookies. The Wolves were way too interested and all of them leaped to a logical, if disturbing, expectation about the taste.”

A terra indigene writer that is visiting with the Courtyard bunch is baffled by human reactions:

“Are there weapons in a bookstore?’

‘It’s a store full of books, which are objects that can be thrown as well as read,’ Monty replied blandly.

The Crows cocked his head. ‘I had no idea you humans lived with so much danger.”

All in all, Murder of Crows isn’t a bad read albeit a little disappointing. I will keep reading the series, and I hope it gets better.