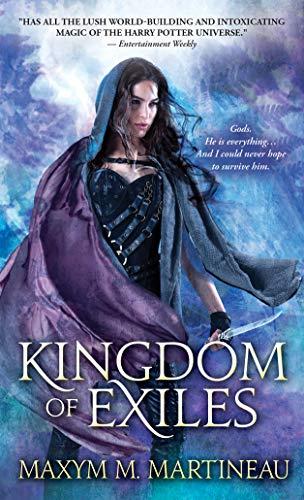 Kingdom of Exiles is an extraordinary story that skillfully combines adventure, thriller, and romance into a gripping read. Fantastic Beasts and Where to Find Them meets Assassins Creed is an excellent description for Kingdom of Exiles.

We’re introduced to a fantastic realm where Leena is a charmer. This means that she can tame and bound with beasts (magical creatures with different supernatural abilities). Leena can summon them at will, and her beasts can protect her.

Blamed for a crime she didn’t commit, Leena is exiled by the Charmers Council and forced to make do by selling her beasts. Things go from bad to worse when an assassin tries to kill her, and she finds out there’s a bounty on her head. Her only chance to survive is to make a deal with the devil. Little does she know about the magic of Cruor’s Oath – assassins are bound by magic to complete their contracts. And thus the adventure begins.

“You’re a long way from home, Charmer. I will neither remove the bounty nor permit you to leave here safely.”

She was so fragile. Breakable. Hard to believe she’d somehow managed to trap my second-in-command. What made her so dangerous that she warranted a bounty?

She strikes a bargain with Noc, the leader of the Assassins’ Guild by offering him beasts in exchange for her freedom. Since she’s unaware of the Cruor’s Oath, he can easily deceive her to get the promised beasts. He plans to kill her as soon as she delivers her end of the bargain. As you can expect, that doesn’t happen. Slowly but surely enemies turn into lovers, but they both have secrets and trust issues, so they fight their feelings. That part of the story was well developed and didn’t fall into the fake insta-romance trap.

He was an assassin. I was his bounty. There were so many things that could possibly go wrong— for both of us. And yet, no matter how hard I tried to fight it, I found myself drawn to him. Pulled to him like the ocean waves were guided by the moon.