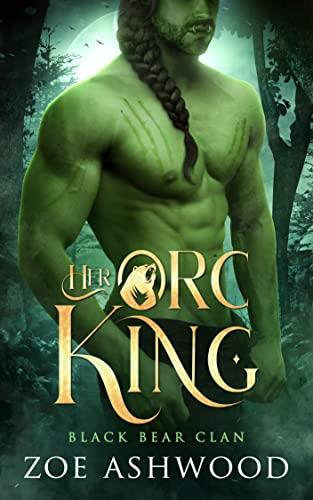 This is the first orc romance I have ever read, and at first, I was reluctant because orcs didn't come across even remotely as sexy. But I love Zoe's books, and I trusted she knew what she was doing, and as it turns out, I was right. So, if, like me, you're new to orc romance, forget everything nasty thing you believe of orcs and get ready to be sucked into an intense story filled with intrigues, romance, loyalty, and steamy sex.

When Dawn is sold at auction and bought by orcs, she thinks she's screwed. She starts with the same misconceptions I did regarding this race of bulky green-skinned brutes. Their secretive nature and the way they've hidden their community adds to the suspense. Well, you know you're reading a romance, so you're not worried about the heroine, but she doesn't know that yet.

Dawn is terrified when she is presented to Gorvor, the orc king, and he claims she's his fated mate. But with every moment that passes, her fear ebbs. Despite the horror stories she grew up with, the orcs are not the monsters she expected. Gorvor is firm but kind and patient with her. The more she learns about the orc community, the less she sees them as savages, and Gorvor grows on her. But Gorvor hides a secret, and she plans to uncover it, which she eventually does, putting herself in danger. Will Gorvor save her before it's too late?

I enjoyed discovering the orc community through Dawn's eyes. The story is well-written in first person POV, the characters are well rounded, and the villain is actually a morally gray character whose story I hope we get to explore later in the series. I have a soft spot for morally gray characters because there's more to them than meets the eye.

I loved Her Orc King and look forward to the next book in the Black Bear Clan series. You can't go wrong with this book if you love monster romance.