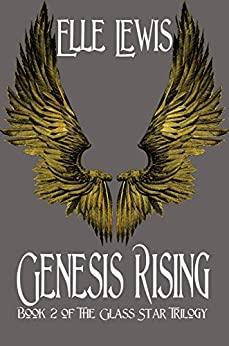 I read the first book in the series, Dark Touch, earlier this year and fell in love with the characters and this new mythology created by Elle Lewis. At first, you’re not sure who’s good and who’s bad, so trust has to be earned.

So, when Elle asked me if I wanted an ARC for the second installment, Genesis Rising, I was thrilled! I enjoyed reading Renesis Rising even more than the first one.

If Dark Touch sets the premises of the story and establishes new creatures and original lore, Genesis Rising throws you right in the middle of the war and lets you fend for yourself. It’s the kind of book you read by the end of your seat that makes you hold your breath at times. Elle constructed a fascinating world from which emerged round characters.

In Genesis Rising, we learn more about The Warriors of The Guild and Dark Ones. When you add punchy dialogue and an outstanding mix of humor, grit, and action, you get the kind of book that inspires fanfiction.

The dynamic between the main characters was realistically portrayed in the sense that they have both good and bad qualities, not to mention secrets and ulterior motifs. Every time you think you figured it out, you realize you didn’t.

After Sloan was saved and “stashed away” for protection by the Warriors, more come to meet her. If that doesn’t foreshadow an epic battle, I don’t know what does.

Sloan, these nine Warriors have left their quadrants. They have traveled to earth to defend you, to aide in the destruction of The Dark One, Darrow. None will harm you.” He inclined his head slightly, a small smile on his lips. “Would you like to meet them?”

So much happens to Sloan in Genesis Rising, but I can’t say much without giving spoilers. Let’s say that Elle Lewis has a vivid imagination that ends up giving you goosebumps. In this case, watching what she did with Sloan, it’s like watching a butterfly emerge from its cocoon.

“She is more powerful than any of us imagined,” Dante thundered, pointing at me. “Unpredictable. Dangerous. Unless she can learn to control it, this cannot be allowed to happen.”

The past events force Sloan to toughen up and become more resilient. She no longer runs in the face of danger. Even as she grows stronger, she hides it until the big fight.

I glared at him, forcing my power to stay down.

“Now that you’ve gotten your tantrum out of the way,” I said around the blood in my mouth. “Where do you want to meet?”

Witty Dialogue. I can think of so many quotes I could paste into my review, but I try not to spoil it for you (I’d end up just pasting the entire book).

“Can Warriors get a concussion?”

He shook his head, his hair still smoking. “I don’t have a brain.”

Genesis Rising is undoubtedly a page-turner, and it gets better and better as the story progresses. Since the story is written in first-person POV, we get to experience first-hand everything that Sloan feels. It’s like watching an action movie in 3d.

I felt afraid, but also morbidly excited. So far, I had used my newfound power on individuals that I didn’t truly want to harm. With Darrow, I wouldn’t have to hold back. I didn’t want to. I wanted to hurt him. It was a new sensation that swirled around my chest with a certain level of discomfort. Never in my life had I wanted to physically harm anyone. Fighting Darrow was about survival, but it was also about revenge, and there was no point pretending otherwise.

I’ll end this review with one of my favorite quotes from this book.

I threw my wings into a sharp angle. I fell through the air, landing soundlessly on the sand. I tucked in my wings and immediately crouched into a defensive position, energy shooting down my sword. My muscles twitched and the dark power rumbled, ready for impending violence. It was hungry, wanting to eat. I grinned.

I have a Dark One to feed to you.