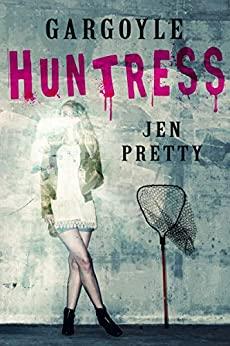 Gargoyle Huntress is a delightful quick read with a quirky heroine whose day job is making pizza, and by night she hunts gargoyles with a net. No, seriously, I’m not kidding! For some reason, demons came into the world and they can possess people. Harlow, the heroine in this book, was possessed by a demon.

She was saved by Lincoln, who trapped the demon in a stone gargoyle. He and others like him are sculptors, and they make gargoyle statues to trap the demons they extract from possessed people. But gargoyles come to life at night, and there are hunters tasked with bringing them back to their intended place.

As a survivor of demon possession, she became a huntress. Being possessed despite being a painful experience, left Harlow with some extra skills that come in handy when hunting the little rock monsters. Harlow wakes up before dawn every day to hunt gargoyles.  The resting place of her gargoyles is the roof of the local bank.

The little demon made the gross rocks grinding noise barely muffled by the sound of about a million people screaming. No, wait, that was just me screaming. God, that stone grinding sound was gross, like nails on a chalkboard.

I slung the net over my shoulder and walked out of the park, toward the bank to make a deposit. Heh.

I found it particularly amusing how she hunts them down with a net and even scolds them for misbehaving.

I netted the first gargoyle that flew past me then fished him out by one leg and netted another. The gargoyle in my hand kept beating his wings and clipped me in the ear. […] A gargoyle snuck up behind me while I was stuffing a particularly ugly one through the small door and latched on to my calf.

I screamed and beat at him with my net as the thing shook my leg like a terrier with a rope tug toy. I dropped my net and grabbed the stupid demon’s wings, yanking when he reared back to get a larger mouthful of my flesh. He fought hard, but gave up and joined his buddies in cold storage.

The plot thickens when some of the gargoyles go missing, and she has to team up with Julien, a half-demon who comes from New York where they have the same problem. Reluctantly, she agrees to accompany Julian, and since he drives a motorcycle things get pretty funny along the way. Also, she has a bit of an alcohol problem. She raids the minibar in all the hotel rooms she stays along the way. But who wouldn’t in her situation?

We walked out the front door and I stopped. I looked at the demon in his hand and the one in my net and then back at his motorcycle.

“This is why you should drive a car.

Here’s one of my favorite quotes:

Nicholas rubbed his hands over his face. “Yeah. He’s fine — stupid kid. I reconnected with my sister last year. She is a lot older than I am and I didn’t mean to get her kid involved in this. He followed me one night when I was staying with them and watched me catch a gargoyle.

I should have been paying more attention. Since then it’s all he can talk about.” He rubbed his forehead. “It’s not your fault he got involved, it was mine for accidentally showing him this world.”

That’s okay. I accidentally let a drunk man pet a gargoyle once when he thought it was a cat.”I thought we were sharing. Oops. “Um, never mind.