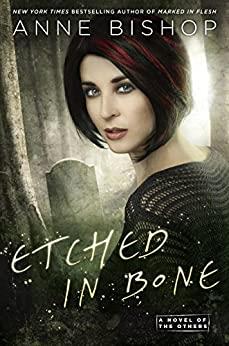 The story continues where we left off in Marked in Flesh with the humans trying to figure out how to pick up the pieces of whatever is left in the wake of Namid’s claws and teeth and rebuild their lives.

In Etched in Bone, the Elders (Namid’s claws and teeth) want to observe the humans interact with the Others and learn what these small predators can do to each other. So when Monty’s brother comes to Lakeside, despite his own family’s warning that he’s bad news, Simon agrees to let him stay. Simon is reluctant to have him so close to Meg but concedes to the Elders’ request.

The Elders keep an eye on Meg, the howling not-wolf, and develop a taste for the wolf cookies. They leave a note asking Meg for cookies. Meg thinks the note was left by pups and yells (hoping they hear her) that good pups say ‘please’ when asking for things. Everyone is shocked!

“Vlad stared at Simon. “Meg told the Elders they were…”

A minute passed before Vlad said, “Why?”

“They didn’t say ‘please’ when they asked for cookies.”

Simon scratched behind an ear that was now Wolf-shaped and furry. “That’s okay. Meg said plenty for all of us.”

Meg gets better at using the prophecy cards, and there’s one pesky little card that keeps showing up. It’s the romance card, and that intrigues her because romance is something she hadn’t experienced and the mere thought scares her. She also predicts that she’ll come close to dying and make a major faux pas – keeps it to herself until the last moment so as not to worry others. Expect a lot of frustration while reading Etched in Bone.

The villain of this novel was Cyrus James Montgomery, Monty’s brother. He’s a con artist and considers Lakeside as easy pickings. Cyrus is presumptuous, arrogant, and not very smart if he believes that human law can keep him safe from the terra indigene in the Courtyard.

As soon as he discovers what Meg Corbyn is he plans to cash in on her. Needless to say, things don’t go his way, and the punishment fits the crime. Warning! It will be gruesome! But you’ll have to read the book to see what happens.

Something unexpected happens, and it will surprise in a good way – it concerns Skippy. Who doesn’t love Skippy?! I hope this character gets more page time in the next book!

It’s no secret that the Others eat the humans who wrong them. They even have a sign that says ‘the trespassers will be eaten.’ They deliver their own kind of justice and sometimes the Courtyard butcher, Boon hangs the ‘special meat’ sign in the window. But they are considerate to Meg and try to hide that from her.

“Tess told us a while ago that there is some mint growing in the Courtyard, so I wondered . . . Do Wolves usually chew on mint?”

“No. Why?” Before coming to see Meg, he’d gone into the bathroom at HGR to use some mouthwash. He’d also examined both sets of teeth to make sure there weren’t any bits of human flesh stuck between them from carrying the backbone.

Did he smell minty from the mouthwash–or was the scent wafting in from the front room?

Meg confirmed that suspicion when she glanced at the Private doorway before leaning toward him and whispering, “When Nathan came back to the office, he smelled like he’d rolled in mint.”

All in all, this was a good book, and I enjoyed reading it. The slow-burning romance is still …slow-burning. Things do evolve on the romantic front but very slowly. If you blink, you miss it kind of slow. So don’t get your hopes too high, a lingering kiss will have to suffice. Ms. Bishop knows how to keep her audience frustrated!