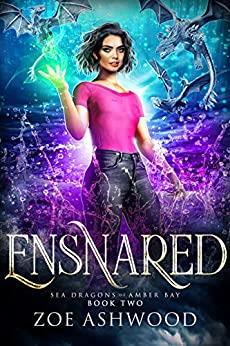 I could not believe the cliffhanger of the first book in this trilogy, Tempted! As I previously stated, I almost pulled a muscle trying to get the second book immediately and while I was at it, I got book 3 too, you know, just in case Zoe Ashwood ended Ensnared with another cliffhanger. Spoiler alert! I did not pull any muscle at the end of book 2. Of course, having book 3 at the ready helped a lot.

As expected, I inhaled the second book. If Tempted sets the scene for the story, Ensnared throws you in the middle of the action with no warning and no regrets. And it’s good! This middle book acts as a bridge between Tempted and Seduced. In this installment, the relationships are building, Skye delves more into her magic powers and it turns out she’s not the useless witch her family and coven seem to think so.

I think the author wrote a solid arc for Skye and I was excited to see her grow. Her pomeranian was such a lovely addition and an adorable source of humor.

The dynamic of their relationship was artfully created and kept me engrossed in the story. Important bits and pieces are revealed at the right time. The book has some well-written steamy sex scenes that will leave you blushing.

This book was hard to put down and I jumped right into the next one as soon as I finished it.