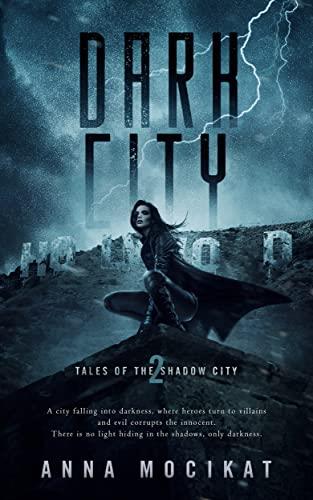 It picks up three weeks after the end of Shadow City. Just like its predecessor, Dark City is a fast-paced novel with multiple POVs intertwined. After defeating the Overlord of the Dark ones everyone in the Zone sees Colton as a hero while the nightmarish creatures regroup to attack.

Colton starts having blackouts, sometimes even during missions, which puts his life and his team at risk. Despite claiming he’s okay, he agrees to go with Bombshell to the Academy for an extensive check-up. After a novel and a half of wondering what Colton is and why he has no memory of his past, we finally find out and I seriously doubt that you can guess the truth. This is a spoiler-free review, so I’m not going to tell you, but it will blow your mind.

The truth about his origin comes with sad news and I’m looking forward to seeing how the author will deal with his situation in the next novel.

The other mystery is Vincent. We learn more (but not everything) about him and his orders too. He is intrigued by the feelings Eurydice stirs in him because it’s all new to him. In the end, he has a difficult decision to make.

We get to read some more cinematic-style fights, narrated blow by blow with great effects. Eurydice is as badass as she was in Shadow City.

There are several plot-twists character-wise. The first of them is Louis. We already knew from Shadow City that he was sick with radiation poisoning and most likely dying. His character arc is spectacular as he goes from the sweet little boy who would do anything for his sister, to the vengeful teen (because his sister Jean has taken an interest in Colton and gives him more attention than she gives her brother) who wants Colton dead. You’ll never guess who sways his loyalty? Without giving too much away, let’s say that Eurydice has a hand in it.

“From afar, they looked like two normal teenagers hanging out on a roof. But in truth, they were two dark souls understanding each other without words. A deadly killer everyone feared, and her apprentice, who they would fear even more someday.”

We get to see Eurydice quite often through Louis’s eyes and she’s more fascinating than ever.

“What happened next, Louis could only describe as some sort of dance, the art of killing shown to perfection.

Louis watched how Eurydice continued her dance of death and destruction, which had an alluring, morbid beauty.”

Eurydice isn’t all bad and we learned that in the previous book when she saved Vincent and not only him. Louis knows this. Vincent is fascinated with her and with his feelings for her which go way beyond lust. They share a memorable night together which makes Eric suspect he has an affair with a vampire (because he picks up vampire scent).

Dark City ends with a bang! The people from the Zone go on a witch hunt with unexpected results and Vincent does something amazing and leaving everyone in shock. I’m sure there will be consequences for his actions and I can’t wait to see what’s in stock for him in the next book.