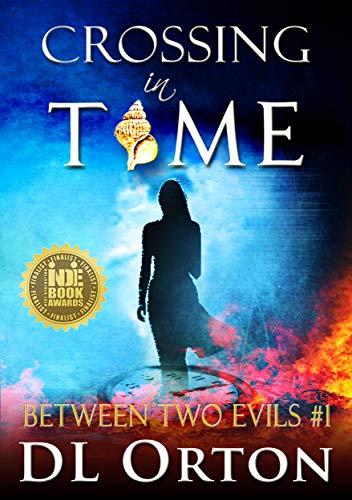 My thoughts on Crossing in Time

Crossing in Time by  D.L. Orton is a fast-paced dystopian romance intertwined with time travel, thriller, and suspense elements. If you’re not much of a sci-fi lover, don’t worry, as the heart of the story is a tangled (in an unexpected way that I can’t elaborate without spoilers) romance. The actual time travel occurs in the last third of the book, so be patient.

What I enjoyed about Crossing in Time

I find the premises of the story refreshing, however, the plot gets convoluted alternating between timelines and dimensions. I don’t know if it’s been done before, but I haven’t read anything like it so far and I was excited to see how it unfolds. It did not disappoint!

I’m happy to say it wasn’t predictable and it ends with a twist. This is the first book in the series so brace yourself for a cliffhanger.

It’s a fast-paced story with an emotional roller coaster so you don’t need to worry about getting bored.

Although the book came out years ago, it sent chills down my spine to read it in today’s context. The Earth is in danger and humanity is circling down the drain due to many things including a virus (not Covid-19, but something Ebola-like that kills across species), and the main character, Isabel, who is a geneticist must go back in time to rescue her failed relationship because it’s the only thing that can save the world.

Crossing in Time is written in the first person POV, present tense. For me, this is a first and it felt very unusual. Please keep in mind that's more of a personal preference and just because I didn’t like it doesn’t mean you won’t.

I also find that in order to enjoy the book to the fullest I often had to turn a blind eye. For instance, at the beginning of the story two ex-lovers, Isabel and Diego accidentally meet after 15 years and decide to have dinner.

Following an argument, she leaves and there’s an explosion. Isabel, crossing the line from brave to stupid, tries to save a dog and a cat from an animal shop (that was affected by the explosion) and gets trapped and severely injured. Diego saves her and proposes. And just like that, she accepts. I know it’s supposed to be romantic, but I just found it hard to believe and rather unlikely, especially since she’s supposed to be smart.

Character-wise, I loved Diego and it was refreshing to see a main character that doesn’t need to be the alpha male to be appreciated. Isabel, on the other hand, is exhausting.  Isabel is another kettle of fish, strong and weak at the same time, brilliant yet foolish. I think she needs therapy!

Despite being the brilliant scientist that’s supposed to save the world, Isobel spends most of the time as a victim in the first part of the book and “miscommunicating” with Diego in the second. I couldn’t connect with Isabel and it was hard to see why Diego was so enamored with her.

Despite not liking the romantic aspect of the story, I think the book is well-written and it’s worth reading for the plot. Expect a lot of action and plot twists.

What would you do if you came across a shell and note in your handwriting giving yourself instructions?

“Prepare for the worst! When things are darkest, give Isabel the shell and let her go. With Einstein’s help, you will meet again. Tell no one or risk losing everything!”

Off-topic, there was a moment that made me think of Marvel’s Avengers: Infinity war. Particularly the scene where Dr. Strange says he’s seen 14 million possible outcomes of the upcoming war and they only won once.

Here’s the quote from Crossing in Time that made me think of it:

“Believe me,” the kid says. “I’ve been searching for a universe that doesn’t go belly-up, and it doesn’t look good.”