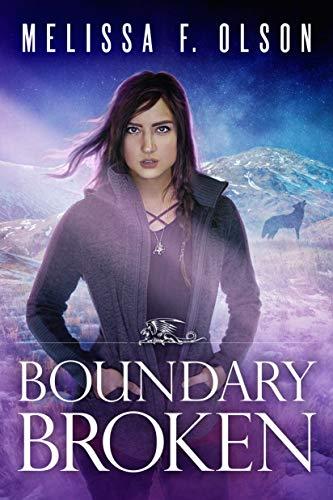 This is the first book I’ve read by Melissa F. Olson, and I loved it!. Boundary Broken is the fourth book in the series. It’s unusual for me not to read the books in order, but I was intrigued by the blurb. So, I can confirm that it can be read as a stand-alone, although there are a couple of things that I didn’t quite get. I’m considering getting the other books and starting from the beginning. I loved how fast-paced it is, the immersive plot, and the intense build-up. I could not put it down.

The one thing I didn’t like is the cover. In my opinion, it looks like it was created by an inexperienced graphic designer and didn’t match the quality of the writing. So guys, don’t judge a book by its cover!

Bear in mind that I didn’t read the first three books in the series, so there might be plenty of details (Easter eggs) that escaped my attention. Nevertheless, I enjoyed reading the book.

Lex is a boundary witch, which means that unlike regular witches she sees the ghosts of those who had violent deaths (if I understood correctly, only those leave behind ghosts, and there are several types of ghosts). By performing boundary magic, Lex helps the ghosts find the door to wherever souls go after death.

“There was boundary magic in my blood, and ghosts could somehow sense that. They didn’t move any closer, but their laughing faces went slack, and they turned their heads toward me, regarding me like a particularly sweet and tempting treat. […] Still in the crouch, I turned in a circle, smearing the blood in a dark line that looked almost blue in the yellowish streetlights. […] “Door,” I said out loud, concentrating as hard as I could on the image of a doorway.

Inside the circle, the pavement disappeared, replaced by a sort of swirling smoke that led… somewhere. I hadn’t opened a gate to, say, heaven or hell – that much I was pretty sure about. This was more of a neutral bridge to… wherever. Limbo, the gates of Saint Peter, Santa’s workshop. I didn’t know, and I wasn’t the least bit tempted to find out.”

Her peaceful life is disturbed when the werewolves that saved her once come to her door to collect the favor she owed. A couple of werewolves from their pack went missing in the Colorado dunes. All they ask of her is to grant them safe passage to Boulder, Colorado (they weren’t allowed there, and I feel this was addressed in previous books). With Mavel’s approval (the vampire leader and her boss) she accompanies them to the dunes only to find them dead.

What happens next puts Lex and her best friends Lilly and Simon at risk. Together they uncover a plot to change the leadership that might start a war.

Most of the book is about them trying to solve the mystery of who is behind all this. There is never a dull moment, and the shocking discovery of the culprit will make your blood boil.

Lex has to make some tough choices and bold decisions to achieve her mission. Trust needs to be earned, but eventually, new alliances are formed.

“All I can tell you is, this thing you’ve got going on, the bigger thing? A lot depends on how you handle it. The decisions you make on this one are going to create some big-ass ripples, and not just in Boulder.”