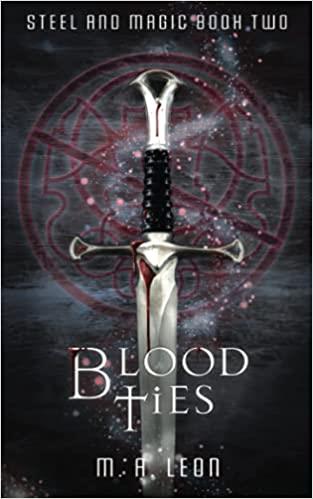 Blood Ties by M.A. Leon is a 5-star riveting story with a thrilling buildup, and strong messages of friendship and camaraderie, loyalty, and betrayal.

The author’s deft prose is topped with an immersive reading experience that lingers long after you finished the book. Please stop for a moment to appreciate the map at the beginning of the book as it’s hand-drawn by the author herself: M.A. Leon – wordsmith and cartographer.

The medieval adventure continues in Blood Ties, the second novel of the Steel and Magic series. M.A. Leon’s immersive magic world keeps the reader engaged throughout the story with new challenges, dramatic tension, and relatable characters.

The writing and world-building are spellbinding at times reminded me of Lord of the Rings, but a little more action-packed, so if you love Tolkien’s writing you should definitely give this series a try!

Picking up where Elemental Links ended, the brothers are back in the city of Maldra as southern Elabrium faces a new threat. They thought they defeated the necroms, but they found a new way of to possess the common people. When Essentia start behaving like necroms and turn against one another, Louie and Jake don’t know what is happening. Things go from bad to worse when one of their own is possessed.

The dominant theme of the story is the neverending battle between good and evil, with a healthy dose of magic, mystery, and plot twists. Besides that, loyalty, betrayal, kinship, and the friendship of those who fight side by side make the characters well-rounded.

“Well, living through a couple of life-or-death situations has that effect on people.”

The second installment in the Steel and Magic saga gets pretty emotional at times, like, for instance, when Louis and Jake return to their parents’ home. If you remember, at the beginning of Elemental Links, the necroms come looking for Louie and slaughtered his parents in their homes.

As the brothers reach their old home for the first time since the attack, memories of old times make for a very emotional scene. We realize how much the brothers have grown since it all started. Thinking of his parents, Louie recounts their many adventures and the friends they picked up along the way.

“And so Louie told them. He told their parents about how scary it had been running from the necrom, meeting Cassie, arriving at Maldra. He told them of Jake’s part in the tournament and how the older brother had nearly won. He described some of the things they’d learned in Maldra and even told them about dancing lessons with Sir Brady, Cassie’s tutor. He let them know how hard Mathew, the former arms master, had tried to prepare them: to keep them alive, despite what they’d had to face.”

I recommend Elemental Links and Blood Ties to all those who appreciate a well-written medieval epic fantasy.