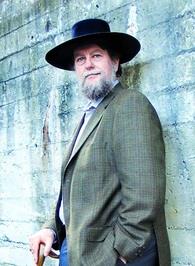 Robert Jordan was the pen name of James Oliver Rigney, Jr., under which he was best known as the author of the bestselling The Wheel of Time fantasy series. He also wrote under the names Reagan O'Neal and Jackson O'Reilly. Jordan was born in Charleston, South Carolina. He served two tours in Vietnam (from 1968 to 1970) with the United States Army as a helicopter gunner. He was awarded the Distinguished Flying Cross with bronze oak leaf cluster, the Bronze Star with "V" and bronze oak leaf cluster, and two Vietnamese Gallantry Crosses with palm. After returning from Vietnam he attended The Citadel where he received an undergraduate degree in physics. After graduating he was employed by the United States Navy as a nuclear engineer. He began writing in 1977. He was a history buff and enjoyed hunting, fishing, sailing, poker, chess, pool, and pipe collecting. He described himself as a "High Church" Episcopalian and received communion more than once a week. He lived with his wife Harriet McDougal, who works as a book editor (currently with Tor Books; she was also Jordan's editor) in a house built in 1797. Responding to queries on the similarity of some of the concepts in his Wheel of Time books with Freemasonry concepts, Jordan admitted that he was a Freemason. However, "like his father and grandfather," he preferred not to advertise, possibly because of the negative propaganda against Freemasonry. In his own words, "no man in this country should feel in danger because of his beliefs." On March 23, 2006, Jordan disclosed in a statement that he had been diagnosed with cardiac amyloidosis, and that with treatment, his median life expectancy was four years, though he said he intended to beat the statistics. He later posted on his Dragonmount blog to encourage his fans not to worry about him and that he intended to have a long and fully creative life. He began chemotherapy treatment at Mayo Clinic in Rochester, Minnesota, in early April 2006. Jordan was enrolled in a study using the drug Revlimid just approved for multiple myeloma but not yet tested on primary amyloidosis. Jordan died at approximately 2:45 p.m. EDT on September 16, 2007, and a funeral service was held for him on Wednesday, September 19, 2007. Jordan was cremated and his ashes buried in the churchyard of St. James Church in Goose Creek, outside Charleston.